Substantial in scale and style, this Napoleon III-period gilt mirror recalls the characteristics of nineteenth-century French design. As the last French monarch, Napoleon III’s reign was defined by tumultuous political upheaval. He was initially elected as the first French president in 1848 before seizing power as Emperor of the French in 1851. Until his death in 1870, Napoleon III encouraged an artistic revival of Roman antiquity in hopes of associating his rule with that classical grandeur. This overmantel mirror, the frame magnificently decorated with elaborate scrollwork, originated at the beginning of his reign circa 1850. The intricately carved floral trim, popular in the period, is most beautifully accomplished with delicately petaled garlands along the top of the mirror. The surrounding acanthus vines further reflect the ornate artisanship distinctive of this historical French conception of luxury. The mirror’s impressive size—three hundred pounds in weight, almost seven feet in height—is also another testament to that preference for opulence. Considering its dimensions, this mirror could be specially mounted over a large fireplace or simply leaned against a wall as a statement piece. 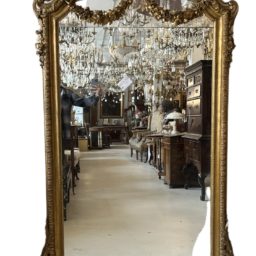